To see how your WhatsApp Campaign performed or performing, go to the “Campaigns” Page of the AiSensy Platform.

Written by Mohit Dua
Updated over a week ago

How to see the Analytics of a WhatsApp Campaign? 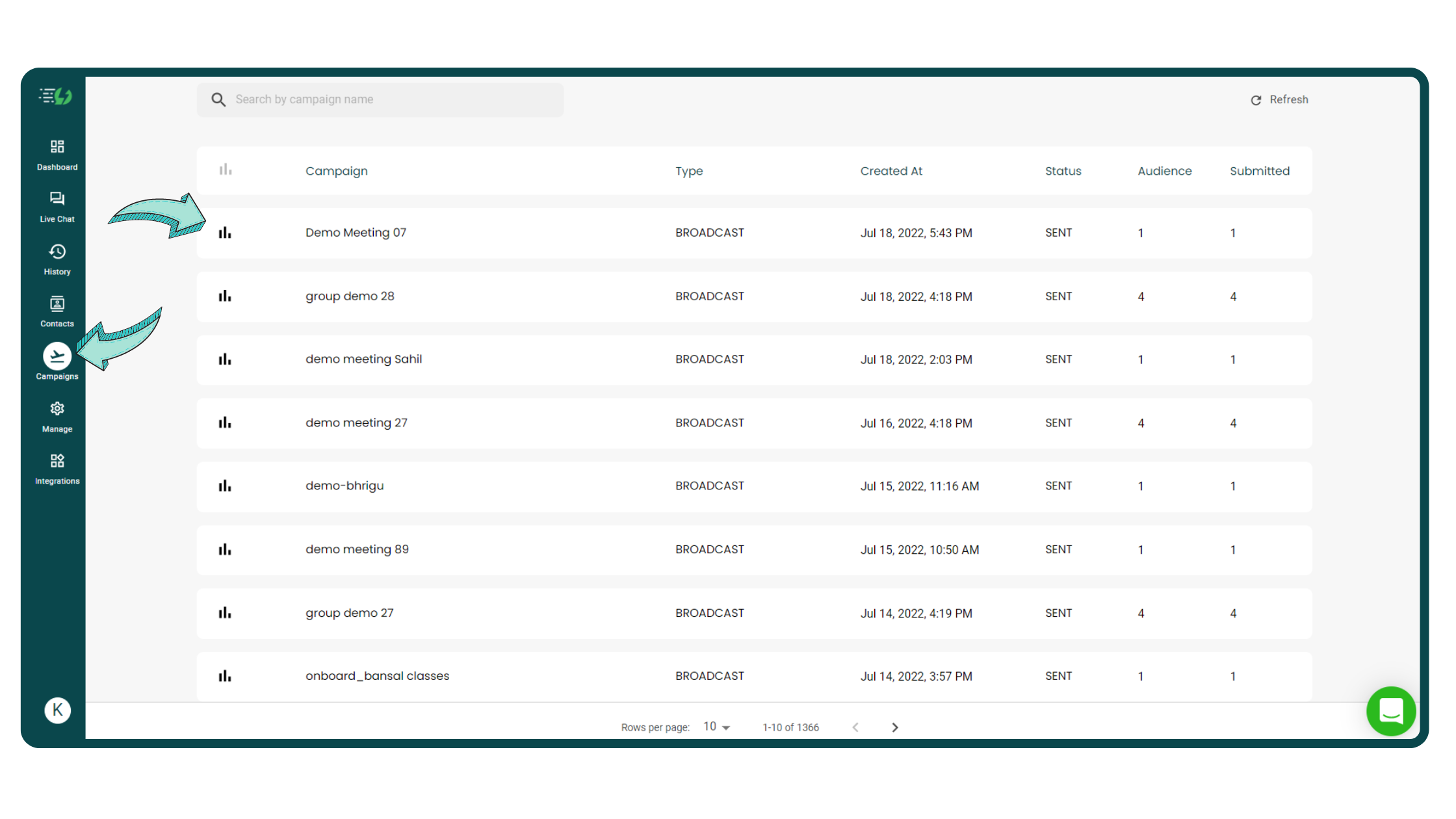 Where can I see the status of all my WhatsApp Campaigns?

The status of all the WhatsApp Campaigns can be seen by going to the Campaigns Page of the AiSensy Dashboard. Status simply means is the campaign Sent, Live, etc. Along with the Status, the Campaign Type- API or Broadcast, Created At, Audience size it was sent to and how many it was submitted to is also mentioned.

What all metrics one can see in the Campaign Analytics?

Following are the metrics one can see in the Campaign Analytics-

1. Status: This shows the current status of the WhatsApp Campaign. SENT for sent campaigns, LIVE for ongoing and running, STOPPED for the campaigns which are stopped and PAUSED for which are on hold.

2. Type: This shows whether a particular campaign is a Broadcast Campaign or an API Campaign.

3. Audience Size: This shows the total number of users to whom a campaign is triggered.

5. Sent: This shows the total number of users to whom a campaign is being sent. This number may be indifferent to the Audience Size since there is a possibility of Phone Numbers that are not on WhatsApp and are considered in the Audience Size.

6. Delivered: This shows the total number of users to whom the WhatsApp campaign is delivered. This simply means the users have received the message on their WhatsApp.

7. Read: This shows the total number of users who have seen and read the WhatsApp message.

8. Failed: This shows the total number of users to whom the WhatsApp campaign isn’t sent. It may be due to the non-availability of a WhatsApp account on that number or the user might have blocked the Official WhatsApp Business API number of the business. 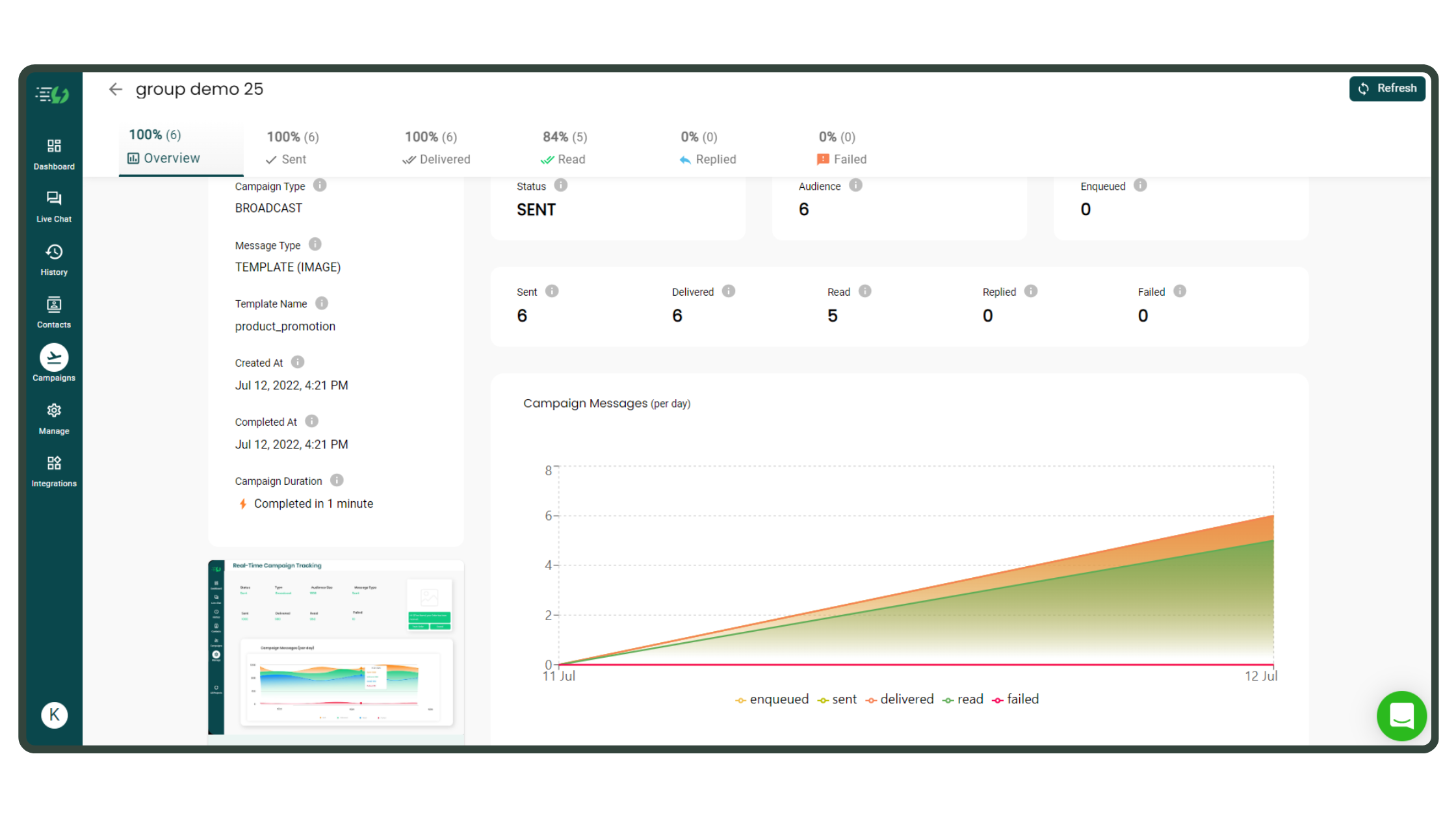 How to stop any running campaign? 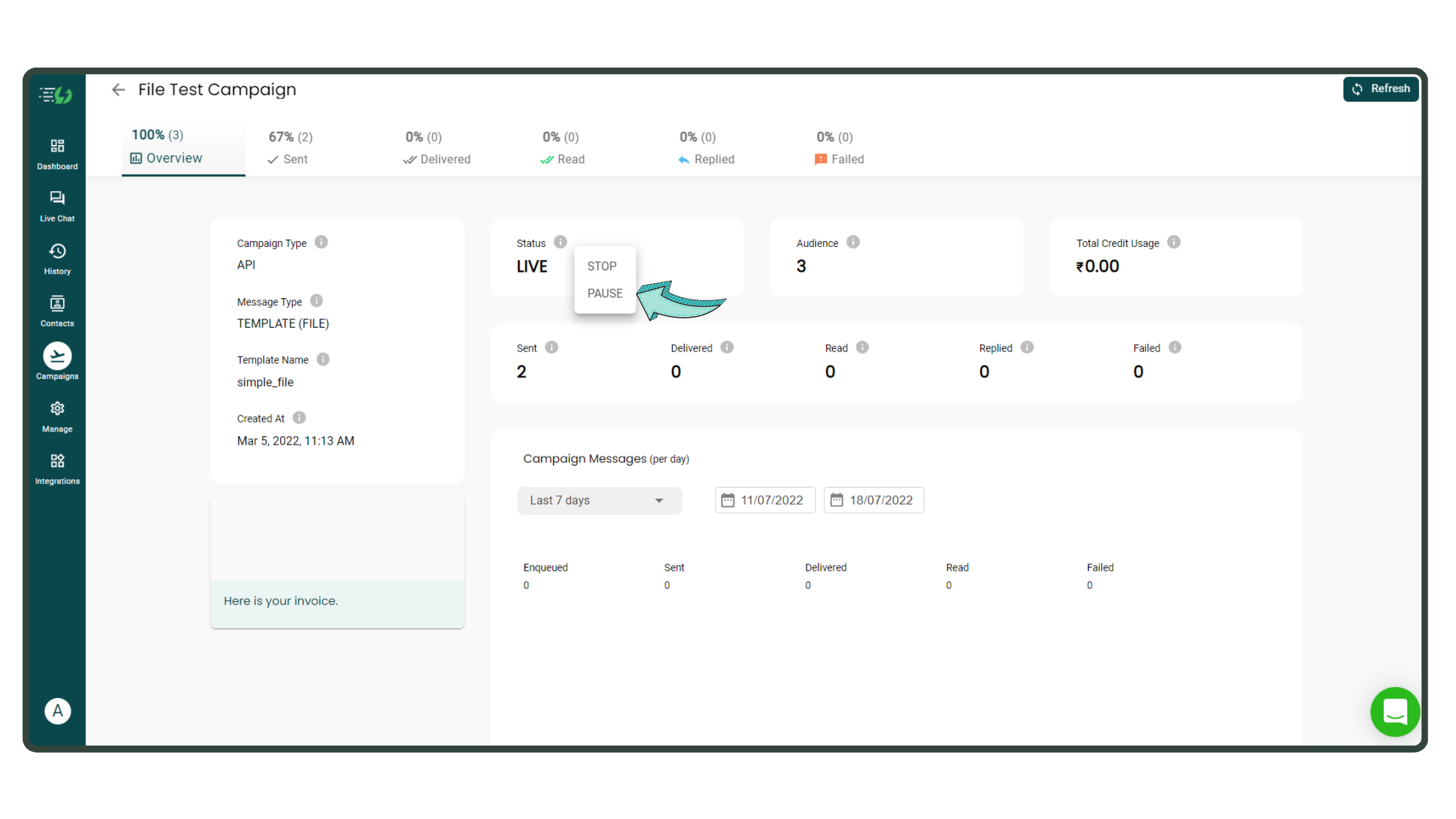 Go to the Campaigns Page and open the API Campaign which you need to Stop or Pause.

Does one gets charged for Failed Messages also?

No. You won't be charged for the failed messages. Only sent messages are charged.

WhatsApp Retargeting Campaigns allow you to retarget a particular set of users by sending them a WhatsApp Broadcast Campaign.

Now, let's say you wish to Broadcast a message:

You can do it in a jiffy with WhatsApp Retargeting Campaigns.

Here's how these sections appear in AiSensy App. 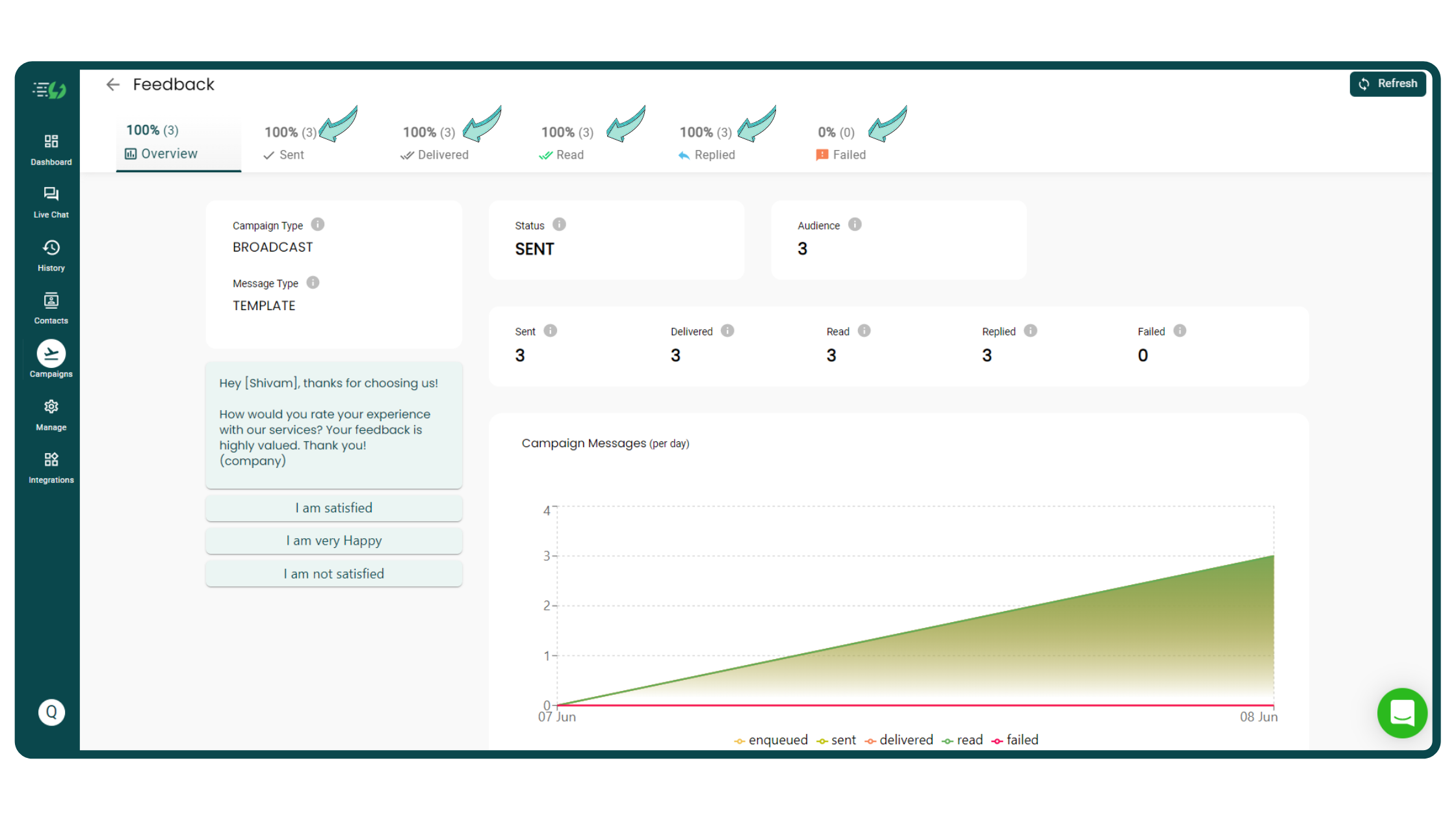 This feature saves you time as well as money by helping you send retargeting WhatsApp Broadcast campaigns to the most relevant audience group.

How to use WhatsApp Retargeting Campaigns in AiSensy App?

Here, we'll tell you how to get started with WhatsApp Retargeting Campaigns in AiSensy App.

For now, we'll show you how to shoot a WhatsApp Broadcast from Contacts Page & then send a retargeting Broadcast Campaign.

First, go to Contacts Page & select / filter contacts to whom you want to shoot the WhatsApp Broadcast. 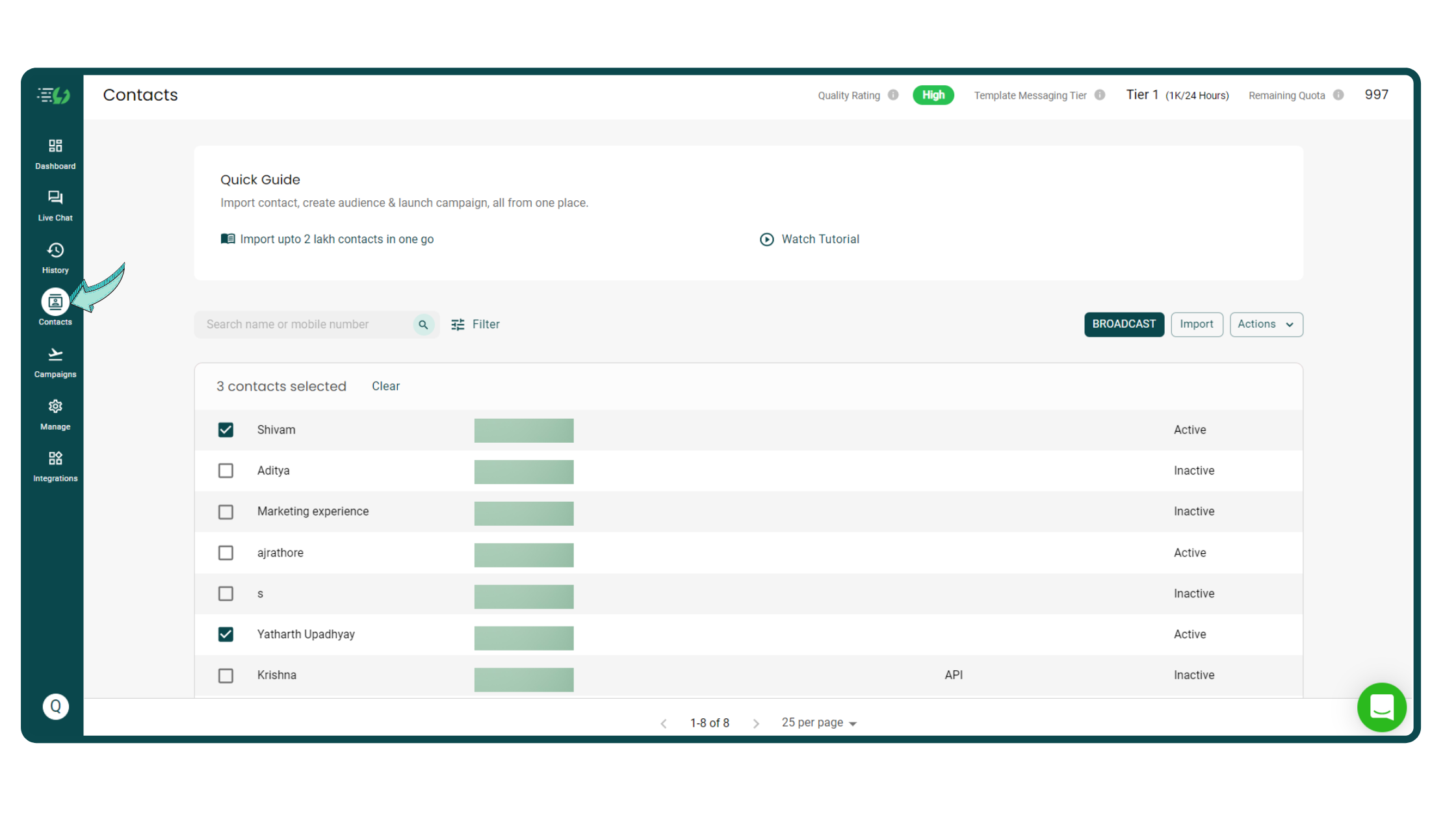 After selecting contacts, hit the Broadcast button & fill in the Campaign Name, choose from a pre-approved message template & fill in the parameters. 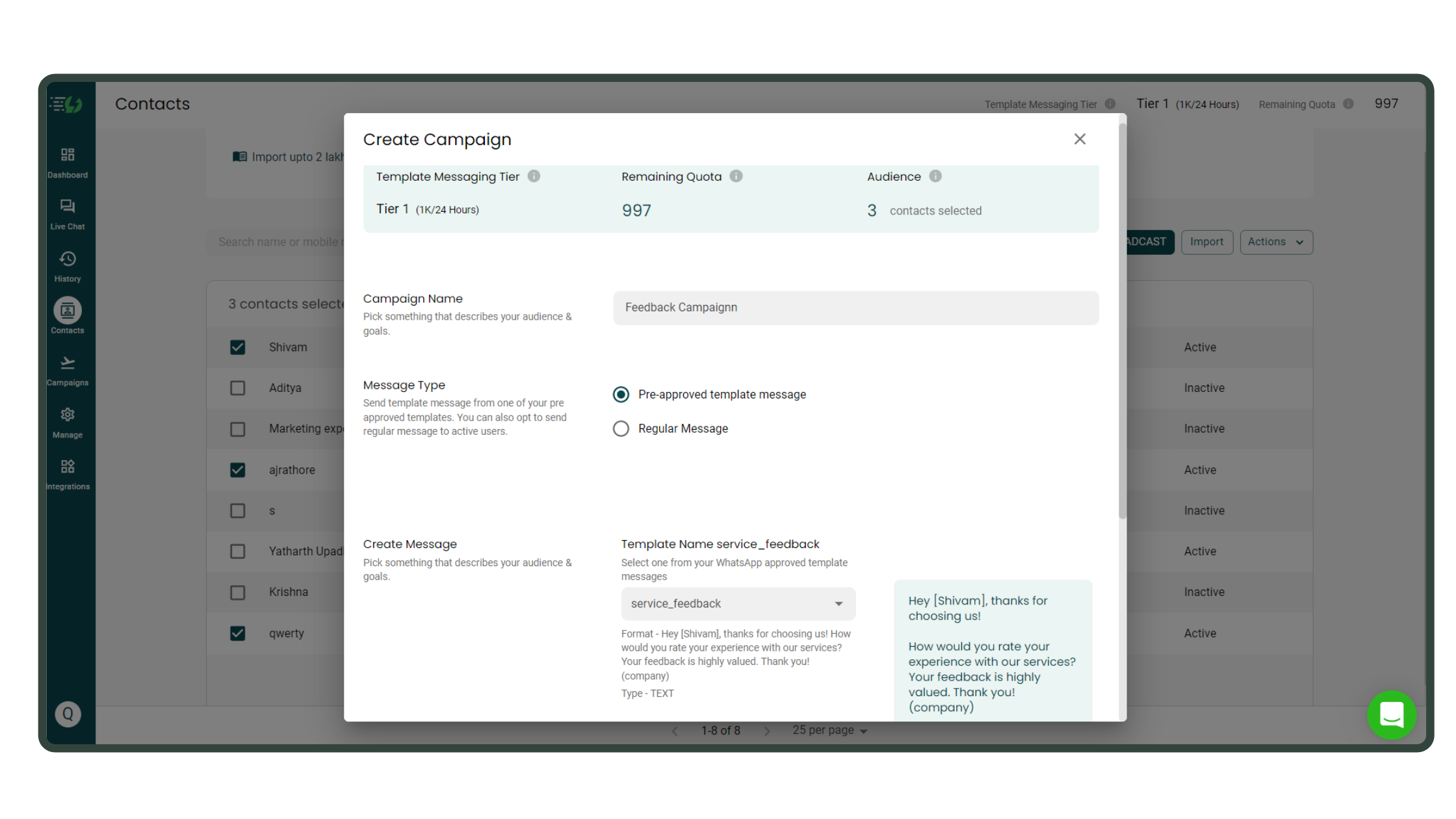 Then, go to Campaigns Page & click the latest Campaign you sent to view its analytics.

Retargeting Broadcast Campaign to users who read your WhatsApp Broadcast

3. Select the names of people whom you want to send the Retargeting WhatsApp Broadcast.

Note - Campaign name will be there by default when you click 'Broadcast Button'. You can customize it based on your use case.

Check out some more Use Case Scenarios of WhatsApp Retargeting Campaigns.

Did this answer your question?